by A Spirale & Chris Cogburn 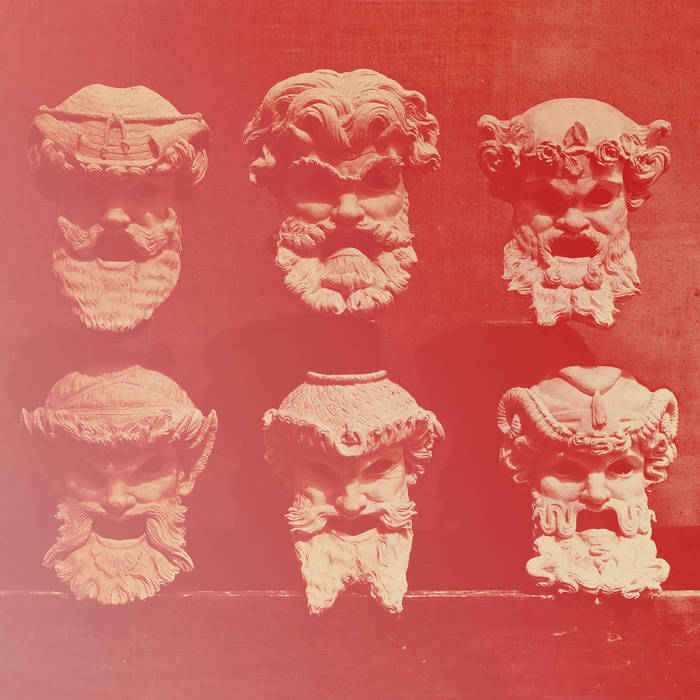 Feedbacks are at the heart of the improvised music recorded by the A Spirale duo and their guest Chris Cogburn. And the three musicians perfectly master the domain, elegantly keeping the tones singing, revealing their fragile status, restraining the storm to make us feel the latent tension even more, elaborating short, raw and very musical structures. It’s just beautifull and very unique.

The A Spirale duo (Mario Gabola on feedback sax, Maurizio Argenziano on electric guitar) and percussionist Chris Cogburn (aiding himself with electronics) have no interest in alluring their listeners with the “beatitude” deriving from predictable sequences and mellow plink-plonking. What they did in a Naples basement is removing the guts of so-called beautiful timbre to let us get besmirched with the grubby core of their instruments, most always manipulated on the verge of feedback (or, at best, of problematic resonance).
What can be detected inside these seven tracks is the spontaneous generation of innumerable micro-rhythms, the nanoscopic earthquakes of strings, reeds and percussion, the acrid heat of the amplifiers, the electronically-induced rejection of dishonest equanimity. The process conveys a sense of collaborative introversion, the result a communion of biologically tarnished improvisations. With repeated listens, the brain gets narcotized by the melting of dangerous saturation, controlled swelling of harmonics, spuriously vibrating particles. At the same time, one witnesses the birth of a jargon pretty unique in its kind. Picture a bunch of termites chomping at the wood of the chairs upon which ordinary aesthetic laws are sitting.
This is uncomfortable music: absolutely not welcoming, it is nevertheless seriously performed and rewarding in its own special way.
Massimo Ricci / touching extremes

The Italian duo A Spirale, comprising electric guitarist Maurizio Argenziano and saxophonist Mario Gabola, was formed in 2002 when it also included drummer Massimo Spezzaferro; the trio version appeared on the ten-disc compilation Musica Improvvisa (die Schactel, 2010). Since then, Spezzaferro has not recorded with A Spirale, and the duo has collaborated with guest players. Autocannibilism is their first release since 2013, and finds them in the company of guest American percussionist Chris Cogburn, who has recorded with such esteemed players as Bonnie Jones, Henry Kaiser, Joëlle Léandre and Damon Smith.
Recorded in November 2017, the improvised session that produced Autocannibalism's seven tracks took place in A Spirale's basement studio in Naples. Central to each of the tracks is the creative use of feedback. There is a fine dividing-line between disaster and success when playing with feedback; disaster can lead to dead silence if the feedback is lost altogether, or to the out-of-control screeching that is dreaded by musicians and audiences the world over; between those extremes lies a success zone in which the feedback is controlled by a musician who can creatively shape and play around with it (usually using a volume control or physical movement.) The entire process is reminiscent of tightrope walking; a performer can fall off on either side but is most engaging when not doing so, with the occasional wobble adding to the tension and excitement of their performance.
When three players of different instruments are involved, playing with feedback becomes more complex than for one alone; the sounds made by one of them have the potential to destabilise those of the others. On the tracks here, none of which exceeds six minutes, the guitar and saxophone predominate, which is unsurprising as those instruments are often used to produce feedback, the former having a feedback history which dates back to The Beatles' "I Feel Fine" and to Jimi Hendrix, the latter owing much to the pioneering work of saxophonist John Butcher. For example, Argenziano's long, sustained notes are bent and sculpted to produce a wide variety of effects, while Gabola's amplified saxophone generates the characteristic popping and ringing sounds from the impact of the instrument's pads closing.
On this evidence, both are adept at working with feedback on the edge of control; as part of their playing each is able to generate prolonged passages of singing feedback that tiptoe close to the dreaded screeching but never quite cross that line and unleash the beast; yes, both are accomplished, exciting tightrope walkers. (Of course, there may have been instances when they did cross the line, which ended up on the cutting-room floor; it is best not to know too much.) While Cogburn does not produce feedback as noticeable as that of his bandmates,' his use of percussion plus electronics provides subtle sounds that punctuate and complement theirs; the combination of the three is an undoubted success which makes enthralling listening and handsomely repays repeat visits. Autocannibalism deserves to stand as a landmark feedback recording.
John Eyles / All about jazz

Just what 'Autocannibalism' is supposed to mean, I have no idea. To eat oneself? This is a disc of improvised music, but albeit one of a more extreme kind. There is a fine level of control being exercised here, in which the feedback is kept well under control. Each player seems to be experimenting with feedback and in all pieces they let it slip out, carefully, in order to take it right back and let it work again. Much of this also deals with sustaining notes, of unwilling moves and gestures of the instruments. It is very hard to figure out what Cogburn does here; I would think much of it is about stirring up the electronics by moving objects around on the drum skins and let it all pick up with speakers below the skins. Also, the saxophone might get a similar treatment of feedback and control. The guitar seems to be the only instrument, which we recognize as such, even with the amount of distortion put on it. The seven pieces last 'only' thirty-two minutes but I would believe that is pretty much enough. It is not because I don't like it, far from it as I am quite enjoying this. The music is quite demanding on the listener. In order to fully grasp what's going on, you need to focus all your attention to it, but it's a most rewarding experience!
FdW / Vital weekly

A brief, precarious set crafted almost entirely from guitar and saxophone feedback (the Italian duo of Maurizio Argenziano and Mario Gabola), subtly—even imperceptibly—bolstered by Cogburn’s percussion and electronics. “Autocannibalism” is an apt and slightly humorous description for this medium, which is always at risk of running away from its creators and consuming these fragile improvisations. The group’s approach is interesting, in that they don’t create the expected long-form drones of beating sine waves, but instead work in smaller gestures, relying on volume control and proximity to ease short tones in and out of existence. I imagine simply maintaining control of the feedback partly necessitates this approach, and the result is more often a call-and-response dialogue that juxtaposes tones of varying grit and clarity rather than a sustained effort at timbre-building or teasing out harmonics. These snippets culled from basement recording sessions are probably the only way this music can come to life, but they’re of interest nonetheless.
Dan Sorrells / The Free Jazz Collective

The duo A Spirale (Maurizio Argenziano on electric guitar, Mario Gabola on “feedback sax”) are joined by percussionist Chris Cogburn on Autocannibalism. The form is similar to Licheni: a similar suite of seven sections of similar dimensions, but the instruments present other difficulties. Jazz allergics like me will be relived to learn there is no noodling going on here; Autocannibalism is an extended study in feedback. Guitar and saxophone merge in sustained tones ranging from smooth to abrasvie, with a heavier emphasis on the choppy side as abetted by the percussion. It’s easy to describe things as sounding ‘organic’ and assume qualities of complexity and coherence, but the struggles of playing in such a way become clearer here, when listened to closely. The easily available range of feedback sounds is limited, requiring skill, invention and, again, taste to keep things interesting without the musicians repeating themselves. There’s less detail and depth than Licheni, but both albums offer a comparable musical experience, executed in different media. In both, it’s not clear if the sections are excerpts from a larger performance or otherwise assembled from various takes.
Ben Harper / Boring like a Drill

Record of improvised music centred around the feedback phenomenon. The duo of A Spirale are two Italian players, Maurizio Argenziano and Mario Gabola, who have surfaced around here before as part of Strongly Imploded, an unusual combo with fluid membership. They also play in Aspec(t), Grizzly Imploded, and Genital Warts. For this record Autocannibalism (INSUB.RECORDS insub.rec.cd02), Argenziano does it with an electric guitar, Gabola does it with a saxophone, but they’re both wallowing in controlled feedback like insects in jam. Perhaps wallowing is too florid a word; considering the rather severe flavour of the music, they’d have to be insects who are also control-freaks and accountants.
They’re joined in these exploits by Chris Cogburn. He is a percussionist and also has “true grit”, like his namesake in the famed John Wayne movie. Applying electronic devices to his kit allows him to feed back too. So far I seem to be making it sound like a dry exercise in process and noise-generation, but in fact there’s some very subtle instrument playing going on here too. Strings clanked, objects pushed about, metal scraped. All with deliberation and stern focus from the three. I have the sensation of being in the world’s slowest traffic jam on a very hot day.
As well as the humming vibrating non-music, you get some elaborate track titles, some of which read like essays from a scientific journal. A journal as edited by Salvador Dali, that is, who also did a famous painting on the theme of Autocannibalism. Plus there’s some masks from classical antiquity on the front cover. A fine groover from Cyril Bondi’s INSUB label.
Ed Pinsent / The Sound Projector