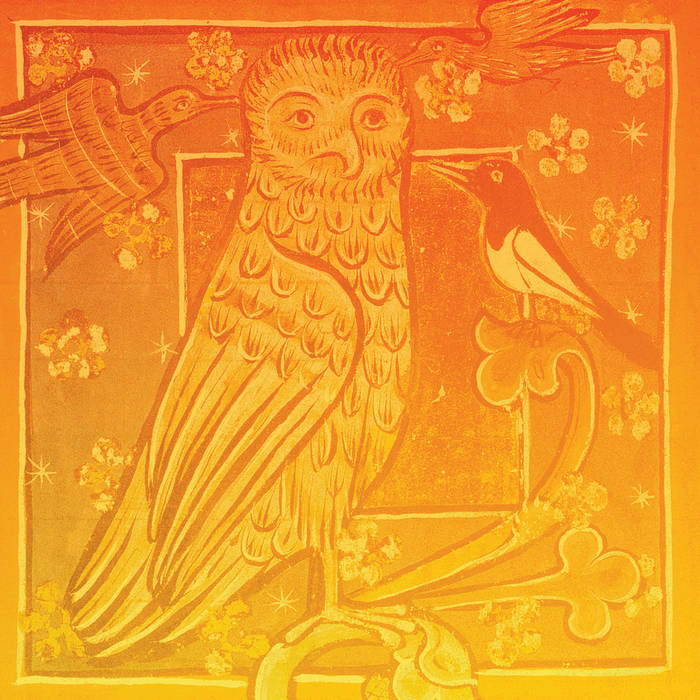 Recorded by Simon Reynell in Geneva, 2018. Mixed by d'incise.

The fact that the commissioned composers are none other than Michael Pisaro and Magnus Granberg speaks volumes about the high esteem in which IMO is held...
This album is not Marcus Granberg's first outing on Insub; his impressive 2017 album Nattens Skogar (Version For Four Players), in the company of Cyril Bondi, d'incise and the Swedish violinist Anna Lindal, had that distinction and forged links which led to this IMO album.
Granberg's compositions are habitually inspired by past compositions by others, although never in ways obvious enough for him to be accused of borrowing. The title of Als alle Vogel sangen mein Sehnen und Verlangen ("As all the birds sang my longing and desire") may be a clue to the source material here, as it is a quote from "Im wunderschönen Monat Mai" ("In the beautiful month of May") the first song in Robert Schumann's song cycle "Dichterliebe," ("A Poet's Love"). Whether or not that is the case, the piece is characteristically Granberg, having his flair for melody and a loose, relaxed delivery. Despite having a large ensemble at his disposal, Granberg has noticeably not overcrowded the piece, instead having deployed the variety of instrumental sounds within IMO to keep the soundscape fresh and interesting as well as uncluttered.
Anyone already under the spell of Granberg, thanks to his Another Timbre recordings with his ensemble Skogen, will relish this IMO recording as it shares many of their strengths.
John Eyles / All about jazz

I characterized Magnus Grandberg’s sound world as “unemphatic.” The same applies here, and the accomplishment of that effect is in direct inverse to the size of the ensemble playing this album-length piece. For this performance, the Insub Meta Orchestra numbers 27 musicians, but it rarely sounds like more than four or five of them are playing at any time. The ensemble is well equipped to represent whatever Granberg suggests. In addition to conventional orchestra instrumentation, you’ll find antique instruments such as spinet, traverso and viola da gamba, as well as newcomers like the analog synthesizer and laptop computer. Granberg selects discerningly from centuries of compositional and performative approaches. The piece’s title, which translates to “When all the birds sang my longing and desire,” tips the hat to Schubert, but the way that timbres offset one another shows a working knowledge with contemporary free improvisation. It takes restraint on the part of the players as well as the composer to make a group this big sound so small in contrast to the silence that contains its music.
Bill Meyer / Dusted

These two long commissions highlight the considerable aesthetic space that’s still available within the narrow ambit of minimalist, indeterminate music. Michael Pisaro is a longtime Wandelweiser member, and while the collective’s label has released work by Bondi and d’incise in recent years, I’m not sure they’ve directly engaged with Pisaro’s music before now. Magnus Granberg has an established working relationship with the pair, and all three have performed each others’ work across several releases on labels like Insub, Another Timbre, and Edition Wandelweiser.

The Pisaro piece shuffles awake with almost incidental sounds, the 28-strong Insub Meta Orchestra trying their best to sound a fraction of their size. As the piece approaches its second half, some more-or-less conventional orchestral swells appear, which gradually splinter into shimmering spectral shards as the music becomes more dense and ominous. It’s tempting to try to chase down the significance of the names in the title or the relationship between this piece and “The Poem of Names” (the third movement of 2018’s Shades of Eternal Night), but I suspect these are fool’s errands. Knowledge of the process doesn’t necessarily elucidate Pisaro’s work; how much of this is a result of specific instruction or improvisation spurred by broad compositional suggestions changes little for the listener. I get the sense that the genesis of much of Pisaro’s music lies in the tension between arranging some deeply private elements with others meant to invite interpretation. Still, it’s not hard to hear in those opening moments the same weather captured in the field recordings from Syros that were used in last year’s piece: gusts of wind, or the surf rolling onto the shoreline. As with past engagements with Pisaro’s work, I’m always compelled to listen, but often leave feeling there’s an unbridged gap. There’s something inscrutable in his music that I’m desperate—and always feel I’m failing—to understand.

In contrast, the Granberg commission felt easier to engage with and ultimately to digest. It’s often quite beautiful music, but didn’t lodge in my mind the way Pisaro’s does. The instruments are more individuated in Granberg’s piece, which is moody but also brightly highlights the variety within the ensemble. Diffuse shapes and hues phase in and out as activity is passed between subsets of musicians. The silences and gaps serve a structural, framing function, implying a ghostly pulse that keeps a feeling of forward momentum. It’s a comfortable piece of music that can surprise in its fine details, but in marked contrast to Pisaro’s unsettled spaces, lacks the dangerous undercurrent of uncertainty. The Granberg is walking a forest path in the long rays of the late afternoon sun; the Pisaro is trying to make your way out in the dark as the rain sets in. Pisaro once said in an interview that he was “deeply challenged by the idea of silence,” which had “come to mean contingency” to him. How far to open that door to contingency is a question to which both of these commissions offer distinctive answers.
Dan Sorrells / The Free Jazz Collective

Boring like a drill
I’ve praised previous recordings by the Insub Meta Orchestra, a large ensemble of some twenty-five to thirty musicians combining an eclectic mix of acoustic instruments with live electronics. Their earlier releases have been joint compositions by two of the members, Cyril Bondi and d’incise, making use of reductive formulas that enabled the musicians to act independently within highly controlled parameters. Two new recordings came out late last year, in which the orchestra interpret new works they have commissioned from external composers.
Als alle Vögel sangen mein Sehnen und Verlangen by Magnus Granberg shows the change in approach from the usual Insub Meta joint. Granberg works with a mixture of musical allusions, distilled and transformed into a distinctive soundworld. This is the largest ensemble I’ve heard play Granberg and it appears that he has deliberately thinned out the texture of this composition as much as possible. (Unusually, Granberg himself isn’t one of the performers.) Each musician’s contribution is sparse and occasional, combining to create a mosaic of distinctive colours that constantly varies in surface and texture but never in state. The large palette of sounds and their sparing use allows the character of the piece to change and evolve over time without any conscious subjective intervention.
How are these pieces made? Neither release comes with any cover notes. While the premise of Granberg’s piece remains elusive, Michael Pisaro’s Achilles, Socrates, Diotima (The Poem of Names, No. 2) is a complete mystery. There appears to be a programme at work, in which the orchestra is set to work on concentrated actions, but the underlying motive remains a secret. From silence, isolated non-musical sounds gather into a gradual rallying of forces. Each successive attempt adds another dimension to the music, at times breaking into a percussive rumble, or a constant drone. One step at a time, it builds up into something sustained and powerful, assembled out of nothing. Like an ancient artefact, stripped of subjectivity and context, it constitutes its own meaning. Repeated listenings don’t reduce its strangeness.
Ben Harper / Boring like a drill

A new CD from the Swiss group Insub Meta Orchestra, playing a composition by Marcus Granberg. The Orchestra seem to be continuing their program of performing composed or semi-composed works, as last noted on their 2018 LP Choices / Melodies. For that one, the nominal leaders of the group – percussionist Cyril Bondi and laptopper d’incise – wrote the rules-based score for what was, to me, quite perplexing and severe music. However, I admired the focus and concentration of the orchestra players who were able to apply themselves to such a challenging task.
On today’s record, Als Alle Vögel Sangen Mein Sehnen Und Verlangen (INSUB.RECORDS insub.rec.cd05), the composer is Marcus Granberg. This Swedish fellow was last heard by us with Nattens Skogar, the 2017 album which was also released by Insub Records and featured the playing of Bondi and d’incise along with violinist Anna Lindal and Granberg’s own prepared piano. I feel now disadvantaged for not hearing more of this man’s many records for Another Timbre, but a pattern of sorts is beginning to emerge for me. Like Nattens, the Als Alle Vögel Sangen record is quiet, slow-moving, and understated, but each note is laid down with a remarkable kind of certainty, as though assured of its place in the world. I say this in spite of the fact that the piece is also quite porous, nebulous even – if conventional 19th century music notation has the deathly precision of an ordnance survey map, then Granberg’s music is something much more indefinable, like perhaps using psychics and mind-readers to trace the course of a bank of fog through the woods. Perhaps they could carry glow-worms in jars to help them on their quest.
The Nattens record was derived – probably at several stages of remove – from pieces of music by Erik Satie and Thelonious Monk, while Als Alle Vögel Sangen doesn’t cite any particular source. However, the critic John Eyles thinks there may be a Schumann connection here, as he can trace the line to a text from the song cycle Dictherliebe. I suppose we could also comment on the large number of players here, lots of strings, woodwinds and percussion, and even a viola da gamba, a musical saw, and a harmonium. Yet the piece never gets especially loud. It’s small and intimate, as though only four players were playing at any one time. Again I tilt the bow-tie of respect to the Orchestra, who are able to exhibit considerable restraint and coolness as they try their utmost to honour the composer’s intentions.
Lastly, I will pay tribute to the inscrutability of Marcus Granberg. I find this music has an opaqueness that makes it hard to penetrate, despite its apparent fragility on the surface. Yet I am intrigued; and the music is imbued with his personality, it is not cold or distant. This was released along with another record by the Orchestra, composed by Michael Pisaro, to be reviewed in due course. I regard them as sister releases as they both have similar cover art too. Very good.
Ed Pinsent / The Sound Projector