Achilles, Socrates, Diotima (The Poem of Names, No. 2) 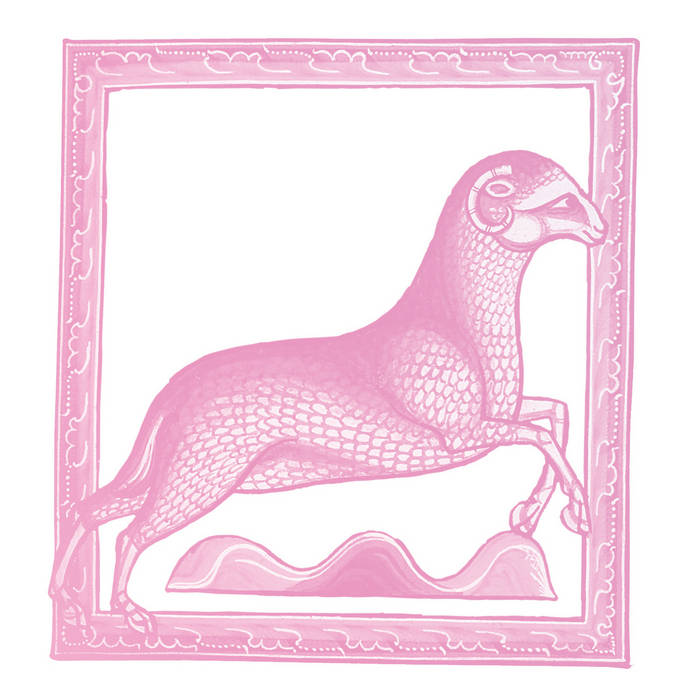 
Recorded by Simon Reynell in Geneva, 2018. Mixed by d'incise.

The fact that the commissioned composers are none other than Michael Pisaro and Magnus Granberg speaks volumes about the high esteem in which IMO is held...
Everything about these two albums makes them seem like companions. Their (uncredited) cover artwork is stylistically similar enough to suggest it originates from one source. Both albums were recorded in Geneva in 2018 by Another Timbre's Simon Reynell, which is good news about any album. Both feature the same 27-strong IMO, one in which two-thirds of the players date back to the ensemble's earliest days. The instrumentation is well balanced between strings, wind, percussion and electronics, with the inclusion of viola de gama, spinet, musical saw and recorders giving the ensemble a distinctive soundscape.
However, the two compositions themselves are distinctly different from one another, making use of the IMO in contrasting ways. Michael Pisaro's forty-eight-minute piece begins sparsely, with the sound of objects being moved about and electronic crackle, slowly joined by the sounds of other instruments which combine into a background over which a range of individual sounds are featured for a short while, the overall effect resembling a cast of characters being introduced individually. Gradually the soundscape fills out until, about a third of the way through the piece, a prolonged note on a horn signals a change, and the sounds of many instruments well up together; this sets the tone for the remainder of the album, with frequent sustained notes on horns being answered in kind by other instruments with washes of hissing electronics surrounding them; altogether, there is enough variation for the piece to avoid being labelled 'a drone,' the combined effect being decidedly dramatic, a credit to both Pisaro and IMO
John Eyles / All about jazz

These two long commissions highlight the considerable aesthetic space that’s still available within the narrow ambit of minimalist, indeterminate music. Michael Pisaro is a longtime Wandelweiser member, and while the collective’s label has released work by Bondi and d’incise in recent years, I’m not sure they’ve directly engaged with Pisaro’s music before now. Magnus Granberg has an established working relationship with the pair, and all three have performed each others’ work across several releases on labels like Insub, Another Timbre, and Edition Wandelweiser.

The Pisaro piece shuffles awake with almost incidental sounds, the 28-strong Insub Meta Orchestra trying their best to sound a fraction of their size. As the piece approaches its second half, some more-or-less conventional orchestral swells appear, which gradually splinter into shimmering spectral shards as the music becomes more dense and ominous. It’s tempting to try to chase down the significance of the names in the title or the relationship between this piece and “The Poem of Names” (the third movement of 2018’s Shades of Eternal Night), but I suspect these are fool’s errands. Knowledge of the process doesn’t necessarily elucidate Pisaro’s work; how much of this is a result of specific instruction or improvisation spurred by broad compositional suggestions changes little for the listener. I get the sense that the genesis of much of Pisaro’s music lies in the tension between arranging some deeply private elements with others meant to invite interpretation. Still, it’s not hard to hear in those opening moments the same weather captured in the field recordings from Syros that were used in last year’s piece: gusts of wind, or the surf rolling onto the shoreline. As with past engagements with Pisaro’s work, I’m always compelled to listen, but often leave feeling there’s an unbridged gap. There’s something inscrutable in his music that I’m desperate—and always feel I’m failing—to understand.

In contrast, the Granberg commission felt easier to engage with and ultimately to digest. It’s often quite beautiful music, but didn’t lodge in my mind the way Pisaro’s does. The instruments are more individuated in Granberg’s piece, which is moody but also brightly highlights the variety within the ensemble. Diffuse shapes and hues phase in and out as activity is passed between subsets of musicians. The silences and gaps serve a structural, framing function, implying a ghostly pulse that keeps a feeling of forward momentum. It’s a comfortable piece of music that can surprise in its fine details, but in marked contrast to Pisaro’s unsettled spaces, lacks the dangerous undercurrent of uncertainty. The Granberg is walking a forest path in the long rays of the late afternoon sun; the Pisaro is trying to make your way out in the dark as the rain sets in. Pisaro once said in an interview that he was “deeply challenged by the idea of silence,” which had “come to mean contingency” to him. How far to open that door to contingency is a question to which both of these commissions offer distinctive answers.
Dan Sorrells / The Free Jazz Collective

Boring like a drill
I’ve praised previous recordings by the Insub Meta Orchestra, a large ensemble of some twenty-five to thirty musicians combining an eclectic mix of acoustic instruments with live electronics. Their earlier releases have been joint compositions by two of the members, Cyril Bondi and d’incise, making use of reductive formulas that enabled the musicians to act independently within highly controlled parameters. Two new recordings came out late last year, in which the orchestra interpret new works they have commissioned from external composers.
Als alle Vögel sangen mein Sehnen und Verlangen by Magnus Granberg shows the change in approach from the usual Insub Meta joint. Granberg works with a mixture of musical allusions, distilled and transformed into a distinctive soundworld. This is the largest ensemble I’ve heard play Granberg and it appears that he has deliberately thinned out the texture of this composition as much as possible. (Unusually, Granberg himself isn’t one of the performers.) Each musician’s contribution is sparse and occasional, combining to create a mosaic of distinctive colours that constantly varies in surface and texture but never in state. The large palette of sounds and their sparing use allows the character of the piece to change and evolve over time without any conscious subjective intervention.
How are these pieces made? Neither release comes with any cover notes. While the premise of Granberg’s piece remains elusive, Michael Pisaro’s Achilles, Socrates, Diotima (The Poem of Names, No. 2) is a complete mystery. There appears to be a programme at work, in which the orchestra is set to work on concentrated actions, but the underlying motive remains a secret. From silence, isolated non-musical sounds gather into a gradual rallying of forces. Each successive attempt adds another dimension to the music, at times breaking into a percussive rumble, or a constant drone. One step at a time, it builds up into something sustained and powerful, assembled out of nothing. Like an ancient artefact, stripped of subjectivity and context, it constitutes its own meaning. Repeated listenings don’t reduce its strangeness.
Ben Harper / Boring like a drill

Here we have Insub Meta Orchestra with the other record that was released at same time as their realisation of the Marcus Granberg composition, the one with the orange owl cover. This time it’s the turn of Michael Pisaro with a single long piece with the elaborate title Achilles, Socrates, Diotima (The Poem of Names, No. 2) (INSUB.RECORDS insub.rec.cd04). Like the Granberg, the release is decorated with what looks like a detail from a medieval illuminated manuscript, this time showing a ram on a hillside; this choice of imagery is in contrast to the theme suggested by the title, which harks back to classical antiquity with its references to Greek mythology and philosophy.
I’ve been slow to recognise the qualities of Pisaro, which is likely to my detriment, and for a long time I’ve held certain reservations about anything associated with Wandelweiser. This might be the piece that turns me around, however. Not saying I “understand” the music on this occasion, but I like what I hear, and it might be that the work of the Insub Meta Orchestra has helped me overcome my personal hurdles. I’ve heard a few Insub items by this point and may be getting closer to understanding the musical language they speak, the currency they deal in…so far, what characterises the work of thus Swiss ensemble is their restrained playing, their slow and graceful movements, the understated tones that emerge from a variety of instruments (strings, percussion, woodwinds, guitar, keyboards). Particularly impressive was the economy and skill with which they handled the work on Choices / Melodies, given scored instructions which to this day seem impossibly difficult to me.
With today’s Achilles, Socrates, Diotima, we’ve been given no background information on what the work means or how it was realised, but evidently there’s a structure in place. The structure is subtle, but the sense of the piece emerges if you listen from top to bottom; starting out very quiet, with small unobtrusive sounds popping out apparently at random, much disconnectedness; then gradually we find the music gathering some kind of momentum. By the final passages of the work, things have somehow coalesced into a very pleasing harmonic pattern, producing slow mixed chords with a stately grandeur. I have to attribute this structure, this progression of ideas, to Pisaro, but it’s possible there’s also elements of interpretation going on within the framework. After all, the Insub Meta team have a background in improvisation (though they are showing increasing signs of leaning towards playing more conducted and composed works), and there’s also Pisaro’s Wandelweiser thing. It’s likely I’ve misunderstood Wandelweiser, or things are changing somewhere, because I’ve always assumed it was about ultra-minimal playing and producing works where the given information was so hard to discern that it presented quite an obstacle to the listener. Conversely, Achilles is both accessible and even quite enjoyable. It’s also quite mystifying. But it’s mysterious in a very good way, inscrutable, hiding its shape and meaning behind layers of music, music which is somehow both opaque and transparent.
I have tried, in my superficial manner, to look into connections between the names of Achilles, Socrates, and Diotima, but my classical scholarship is null. Diotima apparently taught Socrates what he knew about the “concept” of love, but the only source we have for this is a single piece of writing by Plato, and modern scholars now dispute whether she even existed historically, and suggest Plato invented her as a mouthpiece for his own ideas. It may be this aspect that appeals to Pisaro, one layer of truth hiding behind another, as it were; the layering is one vibe that I’m getting from today’s spin of the record, ideas filtered through ideas, with interpretation constantly playing a part. Very good.
Ed Pinsent / The Sound Projector